See below for the most commonly asked questions or download full FAQ Handbook:

What is solar PV (Photovoltaics) or solar electricity?

What is a Small Scale Embedded Generator (SSEG)?

Why solar PV? What about hydro power, gas, biogas and other forms of SSEG?

Since the majority of small scale embedded generators will be solar PV, best practice and processes for solar PV have been used as a baseline for other technologies. The standards and specifications currently available, as well as those being developed do not exclude other types of generation, but do not address their specific detail requirements. More comprehensive standards and specifications which address specific issues of non-PV SSEG are planned for the future, and some Municipalities already have their own such documentation in place.

What is the difference between a Solar PV and a Solar Geyser system?

Solar geysers and solar PV are the same in terms of their input (i.e. solar radiation), but differ in terms of the format of energy output. The main types of solar energy technologies are:

Other solar technologies include:

What are the basic components/elements of a solar PV system?

A solar PV system is made up of different components. For an Embedded Generation Installation (EGI) systems these include 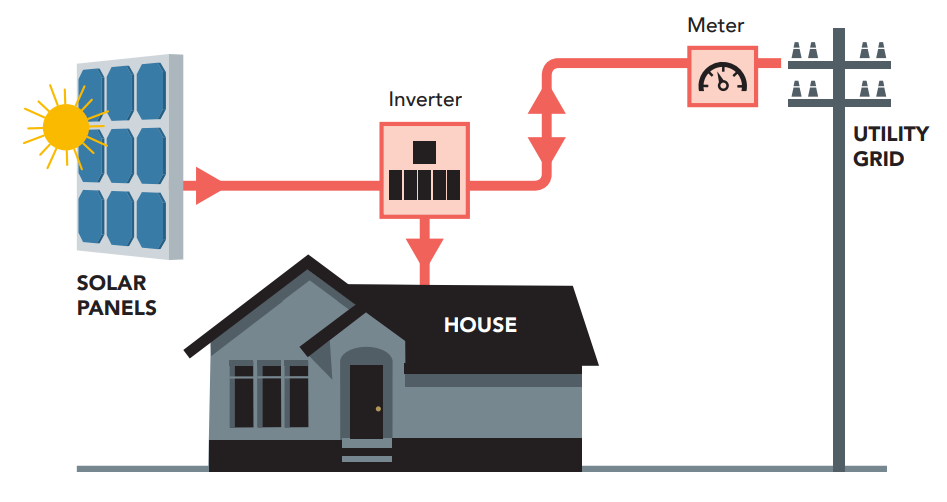 For EGI with storage, additional components could include 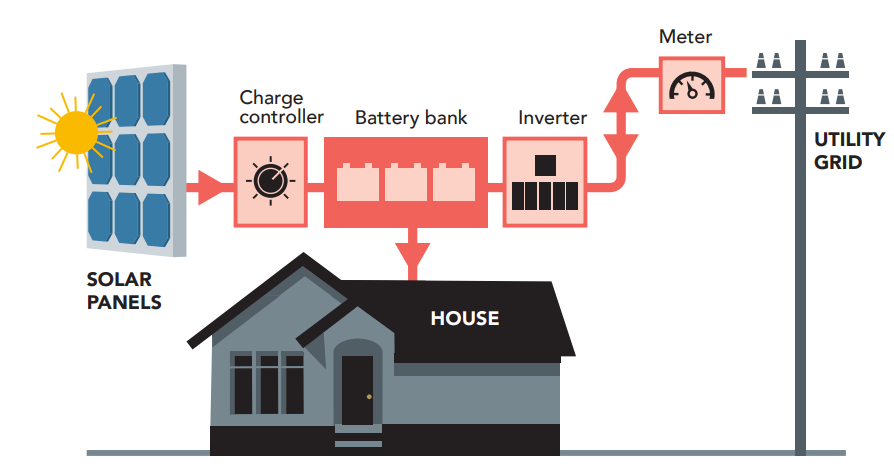 How does a grid-connected solar PV system work?

Here is a basic overview on how grid connected solar power systems work; 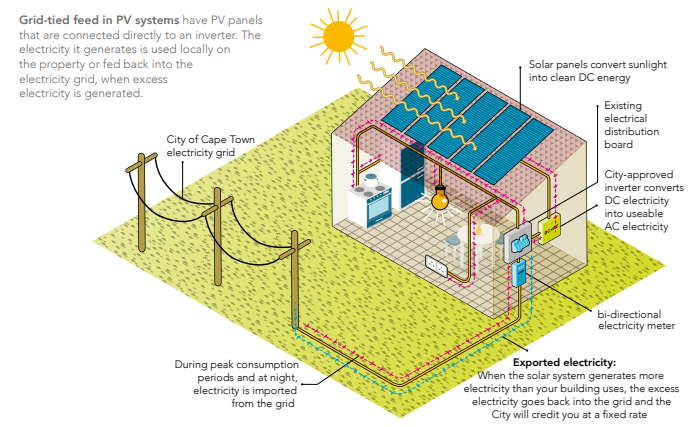 Why is there a recent increase in the number of solar PV installations in South Africa?

With the increase of utility electricity prices and the decrease in price for solar PV energy, it is becoming financially viable for citizens to invest in solar PV solutions that will save them money and serve as an investment in the long run (a PV system typically has a life of over 20 years).

There are also cases where some users install solar PV to meet all of their electricity needs and go completely off the grid due to load shedding, bad power quality, or grid power price escalation trends, or just because they want to become grid independent.

Additional Content: PV solar in the world and SA_v3

What is the price trajectory for the SSEG components? What are the typical system costs and which trends are these costs following?

The cost of solar PV is on the decline and research has shown that the price is likely to decrease more over time; see figures below. 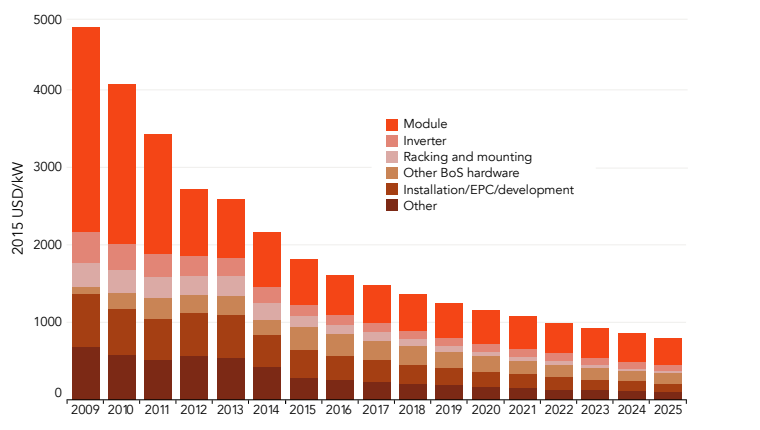 Figure 4: The decrease in the cost of solar PV projected until 2025 (IRENA)

In the year 2018 the typical turnkey cost in South Africa (all equipment and labour costs included) per kWp installed is between R16/watt to R24/watt for residential. For commercial the cost can be R13/watt to R21/Watt.

For example, if you want to install a 2kWp solar system for your house at R20/watt, the total cost will be R40 000 to realise the installation.

The reason for the big price range has to do with the type and difficulty of installation, the quality of products used and economies of scale.

What is the voltage of a single panel?

A common PV panel voltage is high enough to charge a 12V battery, rated 18V DC. However the voltage of one solar panel is based on the number of solar cells connected in series, hence the voltage output can be anything from 0.6 to 50V DC and in some cases can be even more.

How much space will a solar photovoltaic system require?

Depending on the module efficiency, the rule of thumb is 1.8m² for each standard 250Wp module installed flat on the roof’s surface, and 2.6m² for 250Wp modules installed at a tilted angle different to the roof surface and therefore requiring spacing in-between the rows to avoid one module shading another (Also known as inter module or mutual shading).

It is important not to install on roof areas with regular shade, as these areas will limit the overall performance of the solar system.

What is the difference between kW and kWh?

The solar PV system power output, kW, is an instantaneous measured value while kWh, or energy, is kW measured over time (generating 1 kW for 1 hour produces 1 kWh). A solar PV system performance is not determined by the maximum kW output measured, but rather how much electric energy, kWh, is produced over time. The financial savings in most cases is quantified by the amount of kWh produced from the solar system, also known as Levelised cost of Energy (LCOE).

How long should a solar PV system and its components last?

A PV system that is designed, installed, and maintained well will operate for more than 20-25 years. The PV modules has no moving parts and can last more than 30 years. Good quality and well installed inverters, on average can last 10 years or more. The best way to ensure and extend the life and effectiveness of your PV system, is by having it installed and maintained properly. Experience has shown that most problems occur because of poor system installation and/or using substandard/bad quality components.

What typical guarantees and/or warranties can one expect for solar PV components?

NOTE: These are only estimates to give an idea. Number of years are different from each supplier and can increase/decrease over time.

When should batteries be installed?

Why is PV rated in kWp and transformers/generators rated in kVA?

The kilowatt peak (kWp) is the maximum/peak power output you will obtain from a specific solar panel at Standard Test Conditions (STC). That means a 250Wp solar panel will give 250W output if the irradiance (sunlight) is 1000W/m², the cell temperature (the panel itself) is 25 degrees Celsius and the angle of sunlight is almost 45 degrees (Air Mass (AM) of 1.5).

The ratio between the VA (i.e. rms volts times rms amps) and Watts is called the power factor (PF). In other words, VA x power factor = watts. Similarly, kVA x PF = kW, Or kilovolt-amps times power factor equals kilowatts. Transformers have a kVA rating, but will not supply the equivalent kW (active power) due to a power factor loss, hence the kW rating of the transformer is less than the kVA rating. The kVA and kW size of solar grid tied inverters are normally equal, because the power factor is Unity (one).

Can solar PV systems be dangerous?

Yes, electrical shock, arcing and fires are all possible with PV systems and can even be fatal.

What design errors can damage a solar PV system?

The following design errors should be avoided:

For systems with batteries